HomeBlogPerceptionsKAMAKHYA: THE SOJOURN OF A LIFETIME

KAMAKHYA: THE SOJOURN OF A LIFETIME

KAMAKHYA: THE SOJOURN OF A LIFETIME

One of the most mystic temples of the Indian Tantric tradition, KAMAKHYA temple also known as Kamrup-Kamakhya temple, Kamakhya Devalaya, located at Guwahati, Assam, India  is one of the oldest of the 51 Shakti peethas .The Kalika Purana, an ancient work in Sanskrit describes Kamakhya as the yielder of all desires, the young bride of Shiva, and the giver of salvation. Shakti is known as Kamakhya. The goddess is worshiped according to both the Vamachara (Left-Hand Path) as well as the Dakshinachara (Right-Hand Path) modes of worship. Offerings to the goddess are usually flowers, but might include animal sacrifices.

According to the Kalika Purana, Kamakhya Temple denotes the spot where Sati used to retire in secret to satisfy her amour with Shiva, and it was also the place where her yoni (genital) fell after Shiva danced with the corpse of Sati. 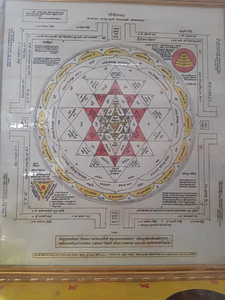 The current structural temple, built and renovated many times in the period 8th-17th century, gave rise to a hybrid indigenous style that is sometimes called the Nilachal type: a temple with a hemispherical dome on a cruciform base. The temple consists of four chambers: garbhagriha and three mandapas locally called calanta, pancharatna and natamandira aligned from east to west.

The inner sanctum, the garbhagriha, is below ground level and consists of no image but a rock fissure in the shape of a yoni (female genital):

The garbhagriha is small, dark and reached by narrow steep stone steps. Inside the cave there is a sheet of stone that slopes downwards from both sides meeting in a yoni-like depression some 10 inches deep. This hollow is constantly filled with water from an underground perennial spring. It is the vulva-shaped depression that is worshiped as the goddess Kamakhya herself and considered as most important pitha (abode) of the Devi.

( a place in temple for offering incense and flowers to Devi)

Legend has it that during the month of Ashadh i.e. June according to the Gregorian Calendar, the Bramhaputra River that flows beside the temple turns red. It is believed that this is a divine phenomenon and that it happens because the Goddess menstruates during this time. While some people claim it is due to the high iron and Cinnabar deposits in the water, others continue to believe that it is a divine miracle! Thus, every year during the Ambubachi Mela, the river and the temple attracts thousands of devotees.

( curated art on pillars of temple)

The Ambubachi Festival is a celebration of the Goddess’ fertility. The celebration hinges on the belief that the Mother Goddess, Kamakhya, Shiva’s young bride, is menstruating at this time. The Temple remains closed and the Goddess is bathed after those three days after which the normal activities of the temple are resumed. It is believed that at the time of monsoon when this festival is observed, the Mother Earth is at her fertile best due to the rain nurturing her womb (the soil).

( A huge bell at Kamakhya museum)

The temple is considered unique as it enshrines no image of the goddess. Within the temple, there is a cave, in a corner of which stands a block of stone on which the symbol of Yoni has been sculptured. The stone is kept moist from the oozing of a natural spring within the cave. The offerings of flowers and leaves are made to the Yoni.

The original Kamakhya temple was destroyed during the Moslem invasion early in the sixteenth century, and the present temple was rebuilt in 1565 A.D. by King Naranarayana of Cooch Behar and fitted with all the paraphernalia of a medieval Hindu temple.

( A bleeding Goddess of blessings )

When Naraka, an adventurer from Mithila, founded a kingdom in ancient Assam (prior to the fifth century), he established himself as a custodian of this Yoni-goddess, and perhaps in conformity to her name he changed the name of the kingdom from Prag.Jyotishapura to Kamarupa. 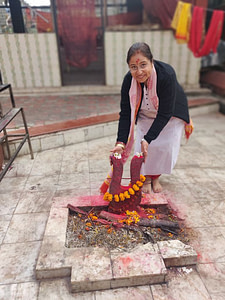 It consists of several individual temples with ten Mahavidyas as the Deities. This temple venerates the Goddess as the source of creation and serves as a symbol of fertility, sexual desire and related bodily functions. The Goddess is worshipped as Yoni in Kamakhya form, which implies her importance as the Goddess from whom all living beings emanate. 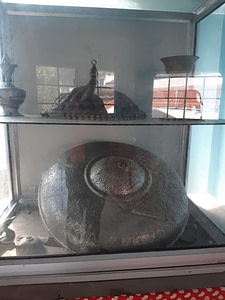 ( The chatra/umbrella for Kamakhya Devi’s idol in Kamakhya museum)

Devotees flock to the Kamakhya temple to receive the Kamiya sindoor which is found once a year in the month of June. This sindoor is in rock solid form and is much sought after for its miraculous properties which bring the blessings of the Goddess to you. It has the propensity to resolve all problems we encounter in our lives and bestow us with all that we desire. It is said to attract wealth and material comforts and helps us prosper professionally in our career or business. It also helps us reconcile with lost love and rekindles the passion and romance in our life. 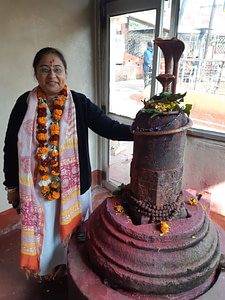 ( Ancient SHIVALINGA copulating itself with a bleeding Yoni at Kamakhya temple)

The current temple has a beehive-like Shikhara, with delightful, sculptured panels and images of Ganesha and other Hindu gods and goddesses on the outside.

( An old relic at Kamakhya museum)

There was once a demon known as Naraka, who fell in love with goddess Kamakhya and wanted to marry her. The goddess put a condition that if he would be able to build a staircase from the bottom of the Ninanchal Hill to the temple within one night, then she would surely marry him. The incomplete staircase is known as Mekhelauja Path.

( TARAPEETH blessings as a prelude to Kamakhya visit)

My sankalpam to visit kamakhya started by receiving blessings from TARAPEETH near calcutta a day before the pilgrimage began. The entire trip was divinely ordained as I was made present in the premises on a very auspicious day and date, it being a pournami, Thaipoosam ( birthday of Lord Murugan), the Mahakumbhabhishekam day of Devipuram and marked the culmination of my 21 day SHIVANGA saadhna to LINGA BHAIRAVI Goddess. it was indeed a great good fortune to be present there at the meeting point of all these celestial events without any planning. The bird offerings to appease the Goddess and the kumari pooja were also succesfully completed.

The kamakhya temple meuseum is a place of spiritual treasures where I found a huge sri yantra and many more unique preserved antiques from the old temple etc. 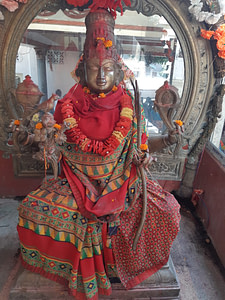 ( A huge idol of Goddess Lalitatripurasundari at Kamakhya temple)

Lalitatripurasundari greeted me with this blessing of a huge idol and its energies were alive and pulsating. There were meditative energies in the soil of the temple which can provide old and deep spiritual perceptions and visions to arrive at the surface of consciousness. The blessings are too many to count. only the willingness to surrender is a mandate.

It has been a journey of a lifetimes which culminated here for me in some way beyond the description of words.