HomeBlogLegendsMARK ROTHKO: SILENCE IS SO ACCURATE!

MARK ROTHKO: SILENCE IS SO ACCURATE!

MARK ROTHKO: SILENCE IS SO ACCURATE! 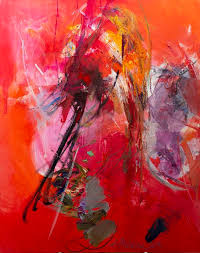 “Art to me is an anecdote of the spirit, and the only means of making concrete the purpose of its varied quickness and stillness.”

Mark Rothko was a genius in the attunement of art created for an elaborate portrait of the human psyche. He was an artist and a philosopher both at once, a magician of colors who knew how to weave the magic spells of distorted imagery in its nascent form….whirling itself at its audience and throwing his spirits in a reverie of some sort.

Mark Rothko was born in Dvinsk, Russia on September 25, 1903 to Jacob and Anna Goldin Rothkowitz. He was the youngest of the four children and sold newspapers after his father’s early death to support the family. After college, he moved to New York where art made its first beckoning to him.In January 1924, Rothko enrolled at the Art Students League and began taking anatomy courses with George Bridgman. Later that year, he interrupted his studies to visit his family in Portland. During his brief stay, Rothko joined an acting company and although his career in the theater was short-lived, his interest continued. Rothko’s love of the theater informed his works throughout his life; he painted theatrical scenes, admired many playwrights, and referred to his paintings as “drama”, and his forms as “performers”. He experimented with Fauvism, Cubism, and Futurism and formulated his own unique Cubo-Futurist style, and in the 1920s he turned to Expressionism. Like many other modernists, Weber was an avid student of the classic works of European art.

During the late 1920s, Rothko supported himself by doing odd jobs, which included toiling in New York’s garment center and working as a bookkeeper for a relative, Samuel Nichtberger, an accountant and tax attorney. In 1929, he took a part-time job teaching children at the Center Academy of the Brooklyn Jewish Center, a position he retained until 1952. In July 1932, Rothko met Edith Sachar, and they married in November of that year,According to Rothko’s friends, his marriage to Edith began to fall apart when she became frustrated by his lack of success and started to pressure him to join her in her business. The photographer Aaron Siskin introduced Rothko to Mary Alice Beistle in 1944, and Rothko divorced Edith shortly before he married Biestle in the spring of 1945. This was a significant year, because in January Rothko had his most important solo show to date, at Art of This Century, where he exhibited a number of important paintings that, as the exhibition brochure indicated, occupied the “middle ground between abstraction and surrealism.” Among the canvases on view were Slow Swirl by the Edge of the Sea, a symbolic self-portrait with Beistle the artist painted during their courtship. In this and related works from the mid-1940s, Rothko created a series of animated revolving forms vaguely suggestive of plants or animals, whereas the flat and heraldic images in other paintings suggest sources in primitive and archaic art. Rothko’s Surrealist-inspired imagery and his use of automatism is evident here, as is his awareness of the work of other Surrealist-inspired contemporaries.

By the winter of 1949-50, Rothko had arrived at his mature style, one in which two or three luminous color rectangles arranged one above another appeared to float within a radiant color field. The residual biomorphic forms, cursory automatic gestures, and flickering strokes of color that characterize such otherwise disparate paintings Many of Rothko’s canvases were monumental in size in the late 1950s and early 1960s. He was quoted as saying that he wanted to express “basic human emotions – tragedy, ecstasy, doom…The people who weep before my pictures are having the same religious experience I had when I painted them.” 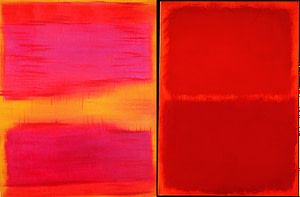 “There is no such thing as good painting about nothing.”

In 1958, Rothko was invited to paint four murals for the Four Seasons restaurant by Philip Johnson, eminent architect and art collect, who had already been a vital force in the New York art world for several decades. In 1964, Rothko received his most important commission, from Dominique and John de Menil, to execute murals for a chapel in Houston. 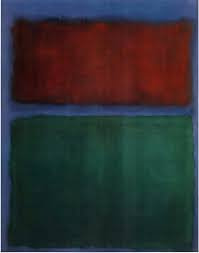 By 1968, Rothko was in poor health. He was a heavy drinker and had suffered from an aneurysm of the aorta. His physical condition was further complicated by family problems, yet in the last two years of his life he produced an astonishing body of work. Rothko remains to this date an awe inspiring enigma for all art lovers. with his attention to detail and the use of vibrant enjoying colors, his rectangles still engage us in all our attention and bring to erupt in us the vast plethora of sensations of being all human.

By the end of his life, Rothko had moved beyond the concept of the subconscious art the “nearer shore of art.” He had purified his art of everything pertaining to the realm of the physical and the intellectual and entered the world of the spirit.

“We assert that the subject is crucial and only that subject matter is valid which is tragic and timeless.” 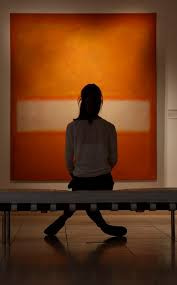